I read that in 2015 the victims at sea among migrants have been, so far, 3200, at least double the previous year’s number. 700 children died in the many shipwrecks... 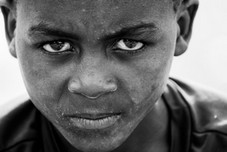 I know that my name is Ahmed.
I am the new one.
Or the possible - that I like the most, 701°.
It depends on the deaf wheel dancing around itself.
Donating and slicing present and future.
But it is not the only accountable.
Because I know.
I know everything.
I already know what you might think.
Maybe you will blame the unwary parents who drag their innocent offspring in a one-way trip towards the bottom of the sea.
I know.
You could also say that all governments are responsible for this.
Ours, yours.
The middle ones.
Leaders who allowed this annoying invasion only able to create unjust guilt to people of good will, until proven otherwise.
I also know that you would recall your children.
Your people.
Your country.
I know perfectly that on the free plate of the balance you shall put the list of impassable obstacles that in recent years you have been finding along the way for happiness.
In short, the crisis.
I know you will go far beyond that.
Insinuating that treacherous enemies, who plot to wipe out civilization and faiths, are hiding behind those infants.
That those infants are, themselves, potential opponents with falsely moving eyes.
You would add that there are times when, to defend your surrounded history, you should banish any human weakness.
I know, I know that for a considerable time you could be touched before that incredible number of drowned buds.
But I also know that the hands of the heart beyond the sea are like slaves.
Subservient to a generous dictator, who gives wonderful illusions of freedom.
At one time there was only a simple remote control.
Today you have a sparkling mouse that animates a magical dancing arrow.
And a portentous keyboard filled with potential anchors, condemned to create always the same story.
I know that too.
Because I already know everything.
I know and you know it.
What you would say and what I will say.
So, let’s do something new, will you?
We do not say anything.
We just change the roles...

Read more stories about immigrants
Buy my latest book, The hoax of the migrants
Help us to realize the X Edition of the Storytelling Festival The gift of diversity