Diversity stories: what makes us human

The first time when…
We might as well tell the human passage on this earth, if maybe one day we will be worthy to be part of the overall story.
Certainly there are spiders, cobwebs are still sublime art, as well as the caterpillar that becomes a butterfly.
Therefore, powering ourselves with tolerance for the myriad of meanness and passion for neglected brackets of beauty, let’s recall some of the first times when...
As the first moment when a man has realized that regardless of how much fine he will act as a father, he will never be comparable to a woman.
Who is a mother.
As the first day when a child has risen straight among the kneel ones and, in spite of silence was the cheapest answer, it asked the very first why.
As the first night that a girl went to bed with the promise of getting up the next morning to look straight into the eyes the so-called stronger sex. So, to begin with, because this, being the first, it is only the beginning of victory.
Like the first scene when humans considered inferior for any reason, indeed, madness, they looked in each other eyes. Expanding the common gaze beyond the idiot that attempts to conceal the horizon with an insult.
As the first war, sold, manipulated, exploited and cynically imposed, but just before the fatal fuse, defeated by those who always puts his heart ahead, as well as the face.
Like the first time when the most human of the ghost turned around and went back, to hell. Because heaven was only the land that he loved and also will love tomorrow. 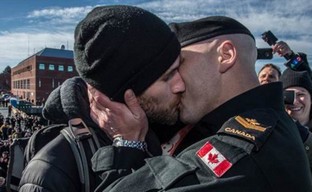 Like the first time that two Canadian sailors shared a true love kiss?
No, I am sorry to disappoint you, but this does not fit in the album of our wonderful memories. It must not. Unlike the first and blessed time that we will not feel any inclination to consider extraordinary such eventuality, but only one of the many during our normal, human.
Life...