If Trump was president here is the story

Once there was One.
Any one, but he was also a different one.
Let's say one that had nothing to do with the past.
One awoke from a ten-year coma.
One that had nothing to do with the present, then, but only with the future.
"What’s up?" He asked a passer-by coming from the hospital.
"Things are things," the man said coolly.
"Well, I see ... I'm sorry, so far I have slept..."
"Oh", the man exclaimed. "Here's another one! I thought you had all died out, failed dreamers, gooders with deluded skulls and flabby hearts."
"No, look, the fact is that I was in a coma..."
The man remained as frozen, like the confused hourglass in the middle of the monitor.
"So you don’t know Trump have won."
"You mean the at the end Trump has become president of the United States?"
"What end? That was just the beginning and it happened in 2016. The big day was when he became emperor of the world. "
"Shit..."
Suddenly the man took out a whistle, blew it, and then shouted loudly: "Bad word, he said a bad word, he said the one with S!"
Apparently the only one who did not know to live in the realm of Trump, One frightened ran away and after he had stumbled on persons even worse than the previous, he tried to find a refuge in a nearby forest outside the city.
However, as soon as he approached the entrance to the green spot immediately he noticed the barbed wire to delimit the borders. He stepped over, but was instantly surrounded by some animals. To be precise, a hen, two squirrels, a wolf, a family of raccoons, a fox and a kangaroo. 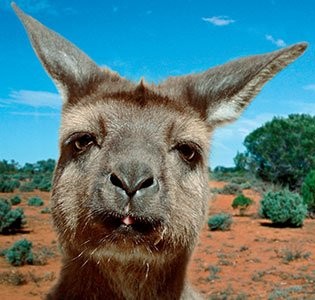 "What the hell is a kangaroo doing here?" He exclaimed.
"What the hell are you doing here," the hen replied on behalf of others.
"The animals can talk?" He shouted increasingly confused. "How is it possible?"
"If it is normal for Trump to be president, animals may speak too, don’t you think?" The kangaroo said roughly, maybe because he did not like the foreigner human.
"Touché," the latter said.
"What?" Almost in unison the animals asked.
"Anyway," the hen informed him, "you have to leave, you cannot enter."
"Why?" One protested. "The forest belongs to everyone."
"The forest belongs to everyone..." The kangaroo mimicked, because he really dislike the man, no maybe.
"The forest is not for everyone," the hen explained, "but it belongs to the animals, the ones who were born and lives there, following its traditions and culture. We cannot accommodate all those who come from outside."
One inevitably shifted his gaze to the kangaroo, who left the spontaneous antipathy for a fierce hatred.
"I assure you that I will respect the forest," One promised. "I will make mine your traditions and culture..."
"That’s not true," the wolf interjected. "You are not like us. You depilated every parts of yourself, even the males, now. Was torturing the sheep not enough? Could you imagine how much can be bad a plucked chicken? "
The hen was not pleased and pecked the wolf on the backside.
"You consider migration a crime," the fox added. "Tell to swallows, deer and grouse rosters."
"You call friends people that you know only for a little face on the mobile screen and enemies others who you have never met in your life and you will never do," the raccoon mother said.
"You stink," the raccoon puppy said just to join the discussion.
"You judge your neighbor just because he has a different way to make love", a praying mantis just arrived on site said.
One was thrilled and a bit worried, feeling as trapped in the middle of the border between the two worlds, the kingdom of Trump and the woods.
Therefore made use of the wisest of possible arguments to convince the animals to welcome him.
"You are right to believe that between us there is bad people, it is normal. But we're not all like that, there are also the good ones, as in all things. It's not fair you to judge me without knowing me, just because of what you have read or heard. "
"Yeah," the kangaroo said enjoying the opportunity to have the last word in the story. "Did you get it, now, huh?"