Migrants wall: the man who feared himself

I read that according to Austrian media also on the Brenner Pass the government is evaluating the possibility of building yet another wall against migrants... 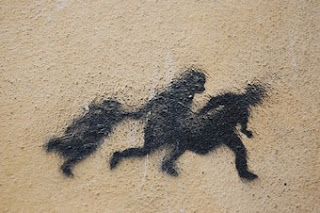 There was once a man.
One among many.
They have already been, you know.
If you look back, you see billions.
Because we are so many, because we have been many.
The man, like so many that there have already been, you know, was feeling tortured day and night by a sneaky terror worse than a snake within. A snake within pretending to be an invincible shield to protect you.
The man feared as death itself being invaded… from himself.
Obsessed by the most paradoxical of human paranoia, he asked help to a man even crazier than him. Or, perhaps, much, much smarter.
I have the remedy for you, buddy, the latter said. Yes, “buddy”. Do you see? All strangers who cannot wait to help you with that problem that pesters you so much ever say to be your “buddy”.
Make walls, make walls around, and forget about it. This was the suggested remedy. Simple and quick solution, with elementary words that also a child could easily understand, let alone a crazy person.
So, the man, who had seen first in the hands, his own hands, the hated enemy, did raise a wall on the wrists. Two stone bracelets that enveloped the way between the arms and the fingers, a boundary between the upper limbs and the ability to grasp but also touch, to push or, at best, caress, often to indicate, sometimes to greet.
The sleep improved, but it did not last long, because in most cases the delirium is like an insatiable drug. As soon as you deceive yourself you can handle it, here it comes under another, much more powerful mask.
The feet, the feet had become the invader, and then the man, as it seemed to have worked with the wrists, and consequently with his hands, did the same with his ankles, making them crushed by impassable walls.
No more anxious races, then, but even meaningless walking, enough with each kind of jump or fleeting illusion to trick gravity, end of any absolutely natural movement from here to there and maybe return.
The rest became further more serene, as well as forced, since the recent amputation, but it lasted just as little, since after his hands and feet the alien presence made hear its voice in the middle of the belly and then inside the chest. To mock the man and all his vain attempts to protect himself.
From himself.
Tired but resolute, he decided to make a clean end to the feud.
“This is no time to show tenderness,” he exclaimed looking in the mirror after a sleepless night, “a man must prove to be a man when it needs, to honor the past heroes, we must win and we will win”, and other amenities of this kind.
So, without further ado, he built the most impressive wall around his neck. An impenetrable rock collar, to defend the last bastion: the precious head, where to preserve intact traditions, history and culture threatened with extinction.
This time the relief, if we may so call it, lasted a few seconds, because as soon as they the last brick was put on the neck, the man began to choke.
He tried in vain to intervene to break down the wall, but he could do nothing, having lost the use of his hands. He thought of running away to call for help, but it was impossible, having also lost the use of the feet. Also he endeavored to shout, but it was useless. Having no longer use of the belly and chest, he was no longer able to blow air into the throat, and speak words of any kind.
However, shortly before his death, the man who did not want to be invaded by himself smiled. Because he had lost and at the same time he had won.
Because once and for all he killed… himself.

Read more stories of migrants
Buy my latest book, The hoax of the migrants
Storytelling videos with subtitles