Warren Richardson, Australia, won the first prize (Spot News, singles) of the 59th edition of the World press photo with "Hope for a New Life". You may see a man and a child attempting to cross the border between Hungary and Serbia in the night of 28 August

2015, when the infamous wall was not yet finished.
Consistent with the famous painting by Magritte, "La Trahison des images" (The treachery of images), a pipe accompanied by the caption "Ceci n'est pas une pipe" (This is not a pipe), here's the true story of the image.. 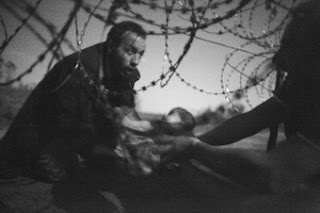 Well, let us start from here: the people in the photo are not the winners.
No one is in such great defeats.

There are no refugees, no, they are not.
Because to have refugees, there should be a shelter waiting for them.
Those who offer it.
And, at least, those who are ashamed of denying them.

There are no survivors.
Wait, let us wait, do not delude ourselves. Do not delude them. The journey, as the story, is not finished yet. Let us build the needing page, instead.

They are not immigrants and illegal citizens, or to translate the sense, the least valuable human.
Because, looks carefully, they are still luckily far from us.
On the line between a hell and the other, but safe.
On the sword’s tip, but not yet stretched in the future injury.
In the dreams of those left behind, still not disappointed.

They are not lives to be feared and, listen carefully, even to tolerate.
Because before a human being ready to put on his hand all the past and present he has, to throw it away like sand in the wind, and so save the only left fruit of his irreversible sacrifice, how can you not feel admiration?
Compassion?
Or even just simple and ordinary empathy?
How can you not?

I even tell you that what you see threatening the youngest among the portrayed lives is not barbed wire. That is the sky that daily dominates those who dared to tattoo their own heart with the most feared four words that ever reached the shores of this fortunate planet: I want to live.

To be honest, finally, maybe you will discover with me that those who we see are not two men that in 2015 are exchanging a child on the border between Serbia and Hungary.
It would be too absurd.
Almost as much as all of us looking them.
Like it was a normal thing...

Read more stories of migrants
Buy my latest book, The hoax of the migrants
Listen my song, The freedom
Storytelling videos with subtitles