Berta Caceres, the activist who fought for the rights of indigenous peoples in Honduras and the defense of the environment, was murdered.
In 2015 she was awarded with the Goldman Environmental Prize. 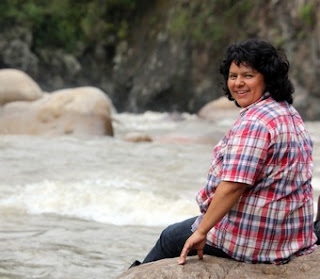 Berta Cáceres is alive.
Nothing but rumors and lies.
Actually, no.
Only lies.
The woman who binds words a fate to words and fate that earth itself writes and draws cannot die.
Until there is earth and those who bind words and fate.
To earth.

Berta Cáceres is not dead.
She is here, no jokes.
Actually, no.
There is nothing to joke about.
The lady with big eyes and the proud face, which filled the former of crushed rights and puffed the latter up meeting the few truths of this world, cannot leave because you decided so.
As long as there are willing souls at her side.
With big eyes and proud face.

Berta Cáceres has not gone.
Look around.
Look inside you.
Actually, no, you may close your eyes and just pretend that nothing happens, if you prefer.
That will not stop the mother with the large embrace as the horizon to change with passion and strength, the only possible directions for an unrelenting march.
And until there is way to go.
The mothers will walk.

Believe, believe me.
Berta Cáceres is alive, she is not dead.
And she has not gone.
Because she is like the rivers that she has always cried and rejoiced for.
You cannot kill a river.
You might try to break its waters with all the fury of the world, punch it at its back or raise your dams of cowardice.
But you will not get more than thousand.
Thousand and again thousand.
A thousand and more thousand rivers flowing together.
Towards the sea they have dreamed of...