Migrants between Europe and Turkey: the playing cards

“EU and Turkish leaders have today sunk to a new low, effectively horse trading away the rights and dignity of some of the world’s most vulnerable people. The idea of bartering refugees for refugees is not only dangerously dehumanizing, but also offers no sustainable long term solution to the ongoing humanitarian crisis,” said Iverna McGowan, Head of Amnesty International’s European Institutions Office. 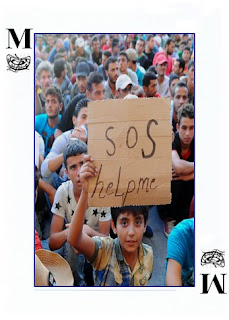 A round table, like the one of the knights with a honest and fearless king.
Let it be told.
Let it be told and remembered that they are brave and righteous, until proven otherwise.
Now, let’s release some fantasy. Namely, let the gallop be heard. To remember that on this page, there will be always room for those who did not come in the photo on the desk at the entrance, the one that everyone looks.
Like steeds who have struggled, suffered and often destroyed back and hooves for others' glory, as the horses of Zorro and D'Artagnan, Robin Hood and Lone Ranger. No one will remember those lives, when all the dust will end to fall.
So, you may cover the round table of knights and intrepid king with a nice green cloth.
Yes, that one.
Now imagine the participants all sat around with their back on a soft place and some tiny souls in the hands.
I suppose it is clear that I am just talking about playing cards, very special ones, indeed.
"If you give me four Afghans I offer you sixteen Somalis," says one.
"Come up to seven and we have a deal," replies another.
"Twenty Eritreans for eighteen of your Libyans," says one.
"I'm sorry," replies the other, "but I've already promised them."
"And what they give you in return?"
"Twelve Chinese."
"We said ten..." corrects the concerned person.
"Now twelve", stands the other. "Otherwise I'll take the Eritreans."
"Too late," exclaims the previous proposer. "I've just sold them for seven Bangladeshis."
"Whose turn is it to take?" suddenly asks one of the players.
"Me," responds another and raises the top card on the deck.
"Victory!" Cries discovering the card.
"Wow, what luck you had," says one of the many wide-eyed. "He found the Syrian…"
"Who gives more?" asks the favored contestant.
And the proposals parade blares.
No way out, however.
The participant with the magic card resists to any attack and the game freezes.
Boredom takes over on the initial disappointment and the players, who have no intention to remain at odds, they find a way to continue.
So they bring along all the cards and build a beautiful castle.
Large, impressive, but fragile.
Incredibly fragile.
Like all the stories which life is at stake in.
That is, where life - others’ life, is a game.
In fact, a breath of wind reached the table.
You need only a card to fall.
No matter what.
And everything collapses.
However, as if nothing had happened, they rearrange the table.
And they start again.
To make always.
The same damn.
Game…