According to Amnesty International in 2015 there was the highest number of executions in twenty-five years... 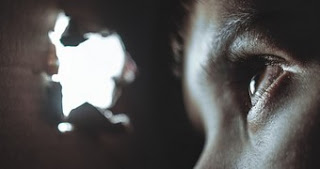 "What is death penalty?" Asks the girl child to the father one moment before.
"What is death penalty?" Asks the young boy to his mother, at the same time, another place, for completely different reasons.
The father does not expect the question, he would not answer, he did not want to hear it at all. But their time is the only one, and nothing can be left out for the sake of those who will survive the sliced groove.
"It’s when we turn off a life that has canceled another from the earth," he says measuring his words with detachment, as if it were not personally related to himself.
The mother is surprised too, she would not speak and did not want to be her, the most suitable woman to respond. But the occasion is that, the only one, and nothing can be ignored for the sake of those who will walk in sliced groove.
"It’s when we turn off a life that has canceled another from the earth."
Same words and same apparent nonchalance, as she is not personally touched.
The girl child thinks about it, a moment later, far away, with dissimilar reasons.
Well the young boy does the same, in another place, for different reasons.
So both, separated by heart, space and especially destinies pronounce the same magic little word.
"Why?"
The father would not want to waste precious seconds right on that way, but it is not to him the new destination, and maybe it is that way since the very beginning.
So he accepts the journey.
For the first time he accepts everything.
"Because so deleted lives will be two," he responds with the voice that barely resists lurking tears, "because then we’ll be even, because this is right. To restore peace between us."
The order of the speech in the words of the mother changes, but not the meaning, as well as the emotions and the conclusion.
"Because so we'll be even, because this is right, because so the deleted lives will be two. To restore peace between us. "
The two children are perplexed, now.
Maybe even a little angry.
Among confusion and irritation sparkles of pain that should never see the light on such fragile soils start to shine.
"It’s not true, Dad, you're lying," exclaims the girl.
A moment before, in the other half of the sky, with different perceptions of all.
"It's not true, Mom, it is false", the boy protests.
At the same instant, on the other half of the earth, with a different memory of all.
This time it is up to the father of the girl who is about to say goodbye to, because in a few hours he will be killed by lethal injection, to pronounce the portentous word. The same happens to the boy's mother, stolen of her husband murdered by the girl’s father.
"Why?"
The words do not reach the lips, shortness of breath inside the chest, but their children's eyes respond the same.
"Because so we'll both be alone, not even, because there is nothing right in this story, because many more lives will be deleted. And because if killing people restored peace, a long time we would live all in heaven..."