Racism stories: Harriet Tubman who died only once

Araminta Ross, aka Harriet Tubman, activist for the abolition of slavery and women's suffrage, has earned the distinction of being the first Afro-American woman on a US banknote.
I can die but once, Harriet said.
Like all great persons who spent their existence for the rights of many, there are an infinite number of times when she will back into life... 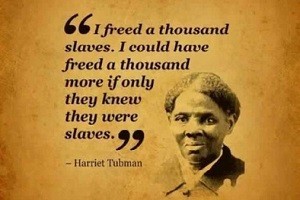