According to UNICEF in Greece, in unacceptable conditions, there are more than twenty-two thousand children...

There is no room for everyone.
In the castle there is no room for everyone, but the prince has worked, has worked hard and eventually found a place for them.
Who dared to cross the moat filled by dark slime, challenging the fairs within.
Those are the ones who have climbed the walls, and that despite thousands loving or just traveling companions were killed along the way to heaven that really heats up, they have come across.
Where they say there is no better life, easier and longer.
But life there must necessarily be, because the other side is now running out.
Meanwhile they stand, breathing becomes normal and dreams increase in volume.
There had dreams before to arrive, let alone now.
However, this is not good, because that is how the gift of grace works: okay, I have taken out the plug from your heart, but do not you dare to bleed on the fine carpet, gosh.
Then the prince has still worked, and again he worked hard.
So he found another, smaller place, on top of the highest tower.
You know, dreams are like hot air, always fly upward. Then it will a problem for birds and aliens, at most.
It is true, it is right, but by that time they will hopefully be watching tomorrow and expectantly it should be more beautiful than yesterday.
And if dreams fly in the sky, everyone knows that hopes have a significant weight, more and more falling down, especially when rendered useless with fervent obstinacy.
Nor this is well, because that is how welcome works: okay, I offer you a bed to sleep, but do not you dare to wake up, uh?
Then the prince went back to work and once again he did hard.
So he found another place, even smaller than the previous ones, under the ground, right next to the cemetery, where the land is thick enough. If it was able to suppress the protests of the billions of dead, repeatedly insulted by our common disregard for the memory, it will be sufficient to quell those of the living, right?
No, it is not enough, never enough, because there are some among them who knew that death so well that living in the cold of a graveyard makes them feel like home.
And they find other strength to draw the next goal.
The next castle, perhaps with a prince less prince.
They think, and the mind is exploding of opportunities, they think, and the horizons are increasing, because they think since they wanted.
Because they have only freedom within them.
And if dreams fly upwards, hopes down, the thoughts go wherever they like.
Even this is not good, but there is no remedy for that.
No one can predict what they will tell.
What wonders they will reveal.
How many gifts they will bring.
Just like all children of this unfortunate planet... 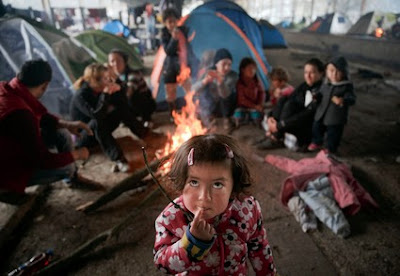