Lost in the Arizona mountains, Ann Rodgers and his dog survived for nine days drinking pond water and feeding on plants. The rescue came thanks to HELP made up on the ground with sticks and stones by the seventy-year old woman.
HELP, one of several forms of the saving words… 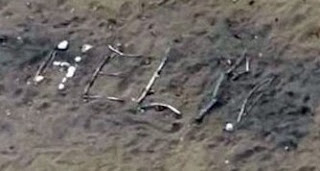 Aid, let’s say it, let’s start with the very first one, so the list is on the way, as the story. On the other hand, at least alphabetically it enjoys precedence, for its deafening spread too. Well beyond our ability of hearing, otherwise, a grateful silence would go on a moment after.
Break, give us a break is what too many murmur, do not scream, because the strength is low, but that does not mean they are not trying to cross the wall. Please, give us a break with adding nationality, probable origins or even the color of the skin of the alleged criminal, pointed cleverly used on the front pages of so-called important media.
Courage, courage is what the rejected stories ask them. Or at least who among them will still remember what it means. Since only those who really listen to them will gain something. All others, including those who dare tell them, will inevitably pay the price. Nevertheless, if it is not this, what else is the courage?
Dare, we dare you to say what you think seriously. This is what viewers who have turned their backs on the principal scene ask for. Since then they have seen things to drop the theater. Say what you have inside, you up there, to audience of the comfortable armchair. And you will see that they will turn their back too.
Endless summer is the title of a film that has yet to start, because there is no money, not even a script rag, much less actors and directors, but this does not mean that the eternal extras not await anxiously to begin filming. Meanwhile they face the winter by dressing as if it was already spring.
Faith, faith in their own gaps and personal imagination in being able each time to mask them as full measures is the only brand bought by massacred souls.
Gaze, gaze down is the verse of a song out of tune and sync, written as rambling rap by a band that has long been erased from the blind course of history. And yet you still hear it, because the past cannot avoid to fret for the future.
Have time, I have so much time ahead. That is what the kids from one face says, the smiling or sad child on the moving newspapers pictures in the weeks of the authorized emotion. I have tons of time to get out of that damn image.
I could be better, the legalized casualty of war wanted to clarify, not good, even if not heard by the latest benefactor on the flashes, responding to his predictable question: how are you?
Let’s fight, of course let’s fight for what we must have, the wrong lovers promise each other going to sleep, even before eternal love.
Migrants, okay to migrants, the victims of the semantic sadism of the third millennium reassure us. All right, do as you like, call us so well, now. Who knows how we will called tomorrow. Where the one that looks straight in the eye has already failed, do you believe that social networks hate will stop us?
No one, no one is here, in the houses of this village by the uncertain fate, in a land that is more precious for what is hiding under that for the life that lies above. Have you ever seen that so you will not bombard us?
Obstinacy, obstinacy is still growing today, uniting us and you are the one to feed it with lies and media abuse. The most absurd thing is that, so far, you have not yet understood that.
Permission, anything more. No permission to have your stuff, because that is called theft, you should know it well, and even to occupy the land of others, other practice you should be very familiar with. Permission to exist, only this we demand.
Question, question your city or people, single person or square meter on the street, anywhere and human manifestation may be the right one to ask a step forward. Because humanity or the planet, we are all places that have to respond to the change.
Respect for the wonders, respect for differing wonders, respect for myself, lame design, impossible even for the photoshop of the king's palace. No, not compassion.
Silence, pay attention that there is also silence, before the death, especially of those who you know only heard screaming, just in case you missed it.
To you, ask for salvation may come also to you. What you will never know is who you will need to donate it, but so the game works. It will be evidence that there was any other interest than help.
Unique, it only takes one, unique life that simply does what he is appointed to do and you will see that chain reaction.
Verity, indeed, without another word, today the opposite of many more atrocities than just lie.
Zero finally, zero is the value in the market of our lives, zero is the portion of interest on our past and always zero is the percentage of future sales on our dreams.
Well, now that you know, relax, stop worrying and listen.
Because the beauty stars now...