The clashes in Idomeni between police and refugees, including thousands of children, are becoming more violent.
A story of monsters... 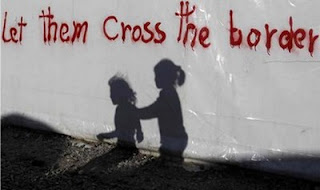 Monsters.
Real monsters, now, we are no more afraid of.
We have learned to fear the others.
The mistaken ones.
Among the most improbable, I have to mention fires spitting dragons and blood donor mosquitoes.
Tsunami that return villages and landscapes even refurbished.
Earthquakes that offer just likable syncopation to those who have already danced enough, until now.
Seas wrecking in the finally safe hearts of the children on the barges.
Hunters who dismantle guns while reassembling animals, fragment after fragment, as a puzzle.
But also ghosts who tell bedtime stories and a happy ending nightmares.
Lethal injections of syrup for cough and cough syrups that treat vengeance sickness.
Civilians who blow their life up in the public square.
And some of the most extraordinary examples of the blind in this world, blessed eyeless creatures that should be cloned and disseminated everywhere as human deterrents against stupidity: those who do not see differences where there are none and see equalities where they should be.
One, ten, a hundred men surrounding a woman alone, helpless on the road, far from light and all together the save her from everything that could make her bad.
Walls that decide to build strong people, and people simply just wise to knock down walls that would never be strong.
Soldiers men who become children and children who rightly become able of not being both, men and soldiers.
People who love other people's love and hates their hatred for the love of others.
Incessant rain of useless tears that rise into the sky to create black gray clouds of all forms, even the most threatening one, but destined to dissolve thanks to the wind.
Blowing on the contrary, by a mountain of candy to the eternal spectators of the fruitful table.
Blessed army pushing sad past away extending their arms.
To welcome and succor, as if it were the most natural thing on earth, the future, the only possible future.
Of everyone’s present...