The photos and the video of Tess Asplund trying to stop with her raised fist the neo-Nazis marching in Sweden are viral.
But who wins? 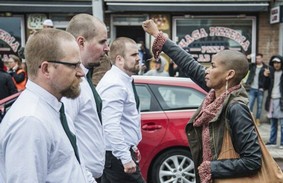 What is the news?
It already happened.
It does even now, despite only them and she know that.
The fact will repeat again, tomorrow and the day after.
Because it is normal, banal human arithmetic, simple balance of playing sentiments, namely, imbalance.
It is an uneven dance, a foregone conclusion, I would say tattered, a so predictable victory to be out of the list of every bookmaker on earth.

Alone against those.
Where is the wonder?
It is a natural physics of emotions, pure logic of equally pure aspirations, inescapable consequence of axiom born with man.
Or maybe I should say woman.
It is David against Goliath in the real world, it is Puss in boots that defeats the ogre along the rugged borders of the latter, and even the little Hansel who saves her brother by tricking the witch who tries to devour their future. And believe me, beyond those same borders it really happens.

Alone against the crowd.
Why the surprise?
It is the only possible outcome.
Do you doubt it, perhaps?
Get the calculator, then, and follow me well.
They are so many, we could also say three hundred.
And she is alone.
Alone with the courage of who does not fight to win, but she knows has already won since she starts to fight.
Alone with infinite serenity in every inch of her mistreated skin, because she knows that same skin will always be the best dress in her life.
Alone with pride in her eyes that does not need the protection of the eyelids, because she know will still meet evil.
Again, again and again.
But every one of those times, evil will find someone else stronger, more obstinate.
And, above all, less alone.

Alone against them.
Now you understand why finally she is the one to win?