Brexit or not Brexit story of Nigel and Ousmane 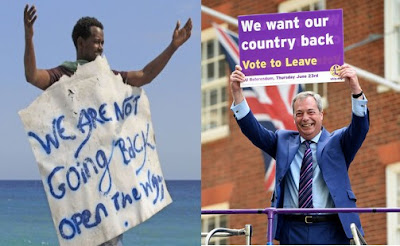 Think about Nigel, the blond Nigel, the pale Nigel and all his eagerness to get out from Europe.
At the same time, consider Ousmane, the dark hair Ousmane, the brown Ousmane and all his hope of get in Europe.
Life is a paradox, isn’t it?
We used to say that often imagination exceeds reality, but the more time passes, the more we underestimate the separation.
The truth is that imagination has already arrived in each, imaginable or real place, since the race’s beginning.
In the meantime reality loves slowing down so much to walk backwards.
So, Nigel comes even to assert that among the reasons of leaving Europe there is also immigration from countries beyond the royal boundaries.
So, maybe in a completely different way, Ousmane comes and nothing more.
Because arriving here is all for him.
But there are also intersections between the two stories, confused parts, so similar to look the same.
You know, Nigel would get out of Europe to protect the economy of his country.
Really? Ousmane would enter it to protect his life and the lives of his loved ones.
It looks the same, I said it, and the difference is venial for all the Nigel’s of this world and clearly not for the Ousmane’s.
There are even more obvious contradictions, otherwise what are we talking about?
Nigel demands to get out of Europe because he is convinced that that will take advantage for his nation's wealth.
Ousmane asks to enter Europe, despite ignoring that the latter everyday takes advantage of his nation's wealth.
There are, of course, mirror contingencies.
Nigel wants to leave Europe because he is sure that it will stay better.
Possible future or maybe not.
Ousmane wants to enter Europe for the same reason.
Impossible future or at best rare.
It is said that feelings define people even more than thoughts.
Well, then let’s look at Nigel, let’s understand him, let’s listen the man who feels himself everything except a citizen of the continent called Europe.
At the same time, let’s go near Ousmane, let’s follow him, let’s observe the man who in order to feel alive will be a citizen of every place that will allow him to be so.
Inside and outside Europe.
Please, think about Ousmane, the dark hair Ousmane, the brown Ousmane and all his urgency to come in.
Meanwhile, consider Nigel, the blond Nigel, the pale Nigel and all his anxiety to get out.
Done?
Here is the solution.
Here is the end of the story.
Make the one go out and get in the other.
And they lived happily ever after…