Story of migrants: the three questions

According to United Nations, more than 2,500 refugees and migrants have died trying to cross the Mediterranean to Europe so far this year. 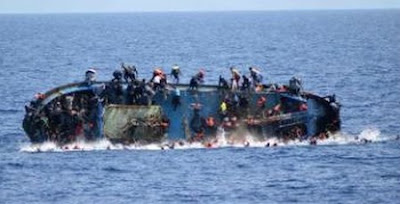 This is a dream, thought the man.
It should be, he hoped more than anything else.
She was there, along with the her new friend at the foot of his bed, like an old fairy tale.
Allow me to confide, she said.
Her new friend was silent.
The man did not answer.
He could not speak even if he had really wanted to.
Even if he were awake.
I'm tired, she declared.
I'm so tired, she repeated. Why you're not?
This is my first question.
How can you not want to run out of all this?
How do you still pronounce these words?
And you have said them, don't deny it, oh if you said them.
Without going too far, once you said that, at the end of the day, they deserved hell for what they did to our Lord, because they adored money, living only among themselves, not integrating.
You said also that, after all, they have made a good deal being captured and brought to the new world, because there they have suffered, of course, but who does not suffer in life? But then they got a piece of land and the sun and the water to make it bear fruits. They have found America, by the way.
You said that even them, yes, them, would anyway be bound to disappear, because the future is only for the most evolved beings.
You said that genocide, whether you look at it from above, is just one of the thousand faces of the normal natural selection.
You said all of that, even if now you don’t remember or you attribute the words to those who you call the villains of the history.
Well, I remember, it's stronger than me. I try to forget, you have no idea how much I commitments in this.
And you know the real joke?
Just when I'm about to be able to turn my head, here you come to take me back.
Back and forth.
This is my conviction.
I'm not complaining.
I do my work, I have always did and I never pulled back.
Or, sometimes, yes, but the absurdity was too much and I hesitated.
You called it a miracle, as you usually do when you don’t understand, but I just smiled.
The second question is who are you, really?
I know who I am, my nature is simple and I accept it without a word with the duties that follow it.
Albeit with extreme fatigue, I’ve also understood the reasons for the existence of the creature beside me, despite I don’t like at all what I saw and I can still see today.
But what are the reasons for your presence in this world?
Because the truth is that I'm the one who, no ifs, ands or buts, always welcomes these marked souls, whose misfortunes you do not miss ever to curse during strictly useless occasions.
I am the one who doesn’t differentiate between any of them, while you show yourself so bold as to discriminate between corpses, and at the same time screaming in equality hymns.
I am the only one who shows the sensibility, if not humanity, which would be yet another paradox, to remain silent before the light that sank. Or that is sinking right now.
Forgive about this time we had, which tomorrow I know you will nonchalantly free of.
I'm leaving, she said. And the human being by my side will come with me as expected.
As it was already written and read, told and listened.
The third question is all yours.
The next day the man woke up confused and agitated very early, but in some way happy to find again the undervalued amenities of life. Like a comfortable bed, the electric light and a couple of faithful slippers waiting on the floor.
So, as she had planned, he forgot within a latte and brioche the visit of Death and the migrant at her side.
However, as just announced, a question survived the nightmare, a horrible story convincing himself that everything was normal and inevitable, that the expendable victims will always be part of the framework and that, after all and at the end of the day, they deserved that.
Nevertheless, again after all and at the end of the day, why did he still feel an unbearable fear in his heart?