Wars without witnesses and asteroids

"We need to put the emphasis on civilian population," said one of the newly freed journalists in Syria, Ángel Sastre. "Because wars without witnesses are the worst kind of wars..."
Ignored stories, negligible fragments that pass us by fast, like the little LT1 that grazes our planet, but it has only discovered three days before... 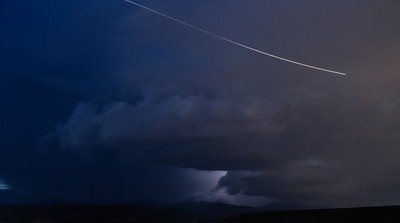 Too many.
We are like asteroids with easy names.
To forget.
We are like tailless and short-lived comets, because that is the space gained in the newspapers, and when it happens it's always too late.
As an adolescent who dies of a drug overdose in an abandoned place. We do not come from a complaining movie of the last century. It really happens today, in 2016, not in the seventies.
We are a migrant killed and everything starts again.
Because he deserved it, right?
Because he was violent, bad and out of mind.
Because he was just a migrant and it would be enough, let’s be honest for once.
We are the daily maltreated women within four walls, thick as the distance between the real common interest and invisible people, by the hand of a rejection of rancid flesh, little brain and nothing human who we try to defend from.
Read well, we're not the one killed and protagonist on the front pages.
We are the ones which you will never know anything of.
As long we will remain alive.
Think about it, because the deception could be extended endlessly, enlarging the frame beyond the usual boundaries.
So, for every denounced facts, watch outside.
Here we are, can you see us now?
We are the children battered by fierce school teacher in the den with no hidden cameras.
And we are elderly equally tortured by the undisturbed evil nurse.
We are even all the actors of the cursed cycle which no one has heard anything of: war, dead civilians, surviving children, young people brought up in hatred and revenge, terrorists who close the circle and war again.
Without witnesses.
We are too many.
Many more than you think.
Otherwise we would find insuperable difficulties in understanding the superficiality of soft living.
We are like asteroids intercepted too late.
But do not worry, we will never come to you.
Because, as it happened with the rest of you, we only grazed life…