We are all ever on the news tip, on anomalous wave’s top.
In short, without fail, on the emergency.
When the omelet is now done, as some say
This is the everlasting, italic story.
So, let’s image a home version in a family like many... 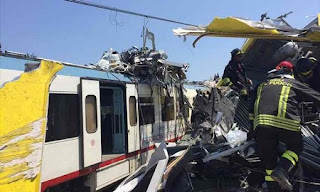 Latest news.
Serious accident in the kitchen.
The brothers, Francesco and Mario, dropped to the ground the last thing you should fall into the ground.
A bottle of oil.
Full to the brim, too.
Indeed, the two villains have also walked with impunity on the dense bush on the floor, spreading sticky greasy and dangerous traces of broken glass throughout the rest of the flat.
Me, a Siamese domestic cat, docile only before meals, and fellow canary from its elevated station, arranged - in my humble opinion - too high, here we are, on the scene, to tell you the umpteenth disaster.
We do not yet know the actual dynamic of the facts that led to the bottle’s fall and we are waiting for the only person capable of restoring order, cleanliness and light.
It is not the father of the two, in case some deluded defender of the common category wants to hazard such unlikely assumptions.
For that matter, it is not even the creature known by the nicknames of the woman who crushes tails without even realizing it, or even be careful naive volatile since she fills your tank with detergent instead of the feed, in short Alzheimer Grandma.
Even the young lady called for extended tamer of beardless orcs by small hands, but able to reach also above the refrigerator, you will see, in short babysitter.
No, she has not yet come home, otherwise...
Otherwise, we would not see any more of that yellowed lake smeared with shards in the kitchen and the grin on the faces of you know who.
On the other hand, this is not the first time that the bird and I find ourselves to act as messengers of such accidents.
Accidents…
To be honest, the very first time I left my poo in the middle of the parlor I did not justified myself saying: "Sorry, but it was an accident, the ass opened by itself and… plop!"
On the contrary, in our kitchen everything happens.
The flies arrive through the window and add to the already unfortunate stage their annoying presence.
The heat, more and more humid, further heats the oil carpet, transforming it into a kind of lava ready for frying.
And the two rascals put on the videogames as if nothing happened.
As long as she arrives, the only, the really only one.
The mother of the little criminals, having seen the fact and called them at the scene, says the three magic phrases, the only worthy of being uttered in moments like this, because the rest is just silly chats and lies.
How did it happen?
Who did it?
And, above all, that will not happen again.
However, unfortunately, there is only one Mom...