"Steve..." the girl calls him after turning around, no longer finding her boyfriend next to her. ”Come here, it's raining..."
The young man - telling the truth no longer so, is motionless on the sidewalk, a step away from the specially tended porch on the glittering window of a jewelry store.
"Do you hear me?" Mary insists, wearing her jacket reluctantly, as many betrayed that afternoon by a deceptive illusion of spring. ”Come here, you stupid. What are you doing, still there?”
Still, yes it is.
Steve is still, with his bowed head, indifferent to the raindrops that gradually crowd around his neck, decided to slide down his back and lay the foundations for a sturdy cold.
"What are you staring at?" Asks the worried girlfriend.
Steve raises his head and looks her, drawing a complex smile on his face.
"Are you laughing?" 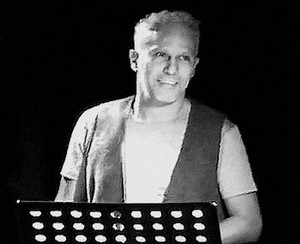 No, he seems to reply.
I remember.
I remember those comrades, at the age of thirteen, which are not yet fourteen, but lacking little, always too much to be an adult, never enough to be like them.
I remember the shoes.
"Today we’re going to buy the new ones, which come out now, those that all have got, those that you cannot have,” they seem to sing as one choir about the fundamental signs of distinction between the creatures destined to the podium and the futile extras of the most unlucky desks.
"Steve, are you coming with us?"
Why does that damn question still burn today?
Why is that blessed question a gift only now?
"Yes,” the lie, ”no,” the truth, or, ”yes,” the worst falsehood, which is only a ‘no’ disguised as absence due to the usual, sudden fever of the professional loser.
"What's wrong?" The second question, even more unbearable, then, the only one worth remembering, now.
Nothing, mum, the inevitable answer.
So, here is the initiative of the desperate adolescent: ”Well, there is something... would you give me the money to buy a pair of new shoes?"
Here it is, Steve, this is what you can have, I think by observing the small bunch of coins that the adorable lady with multiple jobs can reap.
Stubbornness, it is my sin of the time.
What I read now is fantasy.
A moment later I wander among the stalls of the used stuff’s market and I see them.
They are not the original ones, they will never be, and above all the colour is wrong.
It's right now, but not then.
Nonetheless, the price is perfect.
It also advances something to give back to mom, great!
So I return home what I think to deserve with, the best that is up to the fake imitators of school stars.
But I don’t give up, I take the photo of the perfect ones from a magazine, and I bring my couple of Cinderella’s in the bathroom with the box of tempera.
I'm an artist, I tell myself, while I work up. They look the same, they seem true, I do.
When I'm done I'm proud of me, I put them on my feet and look at my face in the mirror.
I won too, despite everything.
So my mother comes in and sees the paint on the floor. I immediately close the door with incomprehensible shame, as if I had been surprised during a theft, and I hasten to clean up.
"It’s not important,” she exclaims, adding words that I only remember now.
It’s washable...
The next day I am at school and, light as the air that only the divinities in the classroom can breathe, flying above the mortals between the companions.
This is the dream, which begins with the first bell, this is the nightmare that makes its way through the second one.
At the metaphorical midnight, magic disappears, the forgotten shoes are two and I’m with them.
Because as soon as I'm in the street, in the crowd of students, it starts to rain and the water shows them my real nature.
The sneers and above all the laughing still echo today, under the hoods and the shelter of the umbrellas.
As I am smiling too, now.
"Steve,” Mary implores, ”please, come next to me, do you want to get sick?"
Instead I keep on remembering, feeling good and every second better.
Because the rain has finally erased the empty ballast of adolescence and brought to light the lovable essential.
Thanks, Mom.