The game of life

"Wow," says the young man lifts his eyelids altogether,"I guess it worked..."
"What?"
He boggles, because he had not seen the guy on the threshold of the strange room.
"Who are you?"
"Your administrator, sir," replies the man, black trousers and tie of the same colour on a shirt even whiter and impeccable than the walls.
"What worked?"
"The time machine... because this is the future, right?"
"It depends on what you mean by the past, sir."
"I don’t get it..."
"Nothing, forget it, let’s worry about the game, instead."
"What game?"
"What a silly question, sir: the game of life."
At that moment the boy focuses on some aspects that are anything but negligible. Despite being on the same laptop chair which he had made the futuristic leap from, there is no longer the latter before him, but a large panel full of buttons of many colours, marked with labels that specify the use.
"What's this thing?"
He starts to get up, but realizes that he is practically imprisoned on the chair by some sort of safety belt.
"I told you, it's the game of life and in a few moments it starts again."
"What?"
"The game."
"Can you explain to me what the hell are you talking about?" 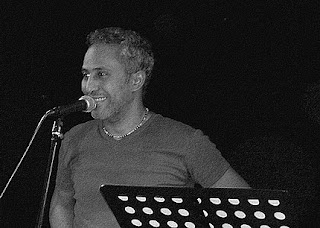 "Oops, right… now I remember your kind."
"What are you implying with that?"
"Nothing, let's think about the game. Do you see those buttons?"
"How could I not see them? They’re hundreds..."
"Well done, you can also count."
"Are you making fun of me?"
"And also smart, excellent, you’ll need it. So, without a specific order, from the resumption of the game each of those buttons will turn on and, when this happens, you’ll have to be ready to press it, without forgetting even one."
"And what happens to me if I can’t do it in time?"
"Nothing."
The young man emits the classic sigh of relief.
"Nothing to you, I said, but for someone else it won’t be pleasant."
"What does it mean?"
"In addition to the buttons, can you see the tags attached to them?"
"Of course."
"Extraordinary, what an acute sight."
"I really think you’re making fun of me."
"And he sees everything, congratulations."
"Please, can we go back to the point?"
"Yes, read for yourself."
The boy approaches to a random button.
"For example, here I read migrants."
"Good choice: well, like everyone else when the button lights up you have to press it within five seconds."
"What if I don’t do it?"
"A boat full of refugees sinks into the open sea."
"But so they can die..."
"Incredible, you’re a genius. Well, if you insist to ask, yes, I'm making fun of you."
"Here it was, in fact this seemed totally absurd."
"I was not referring to the game, sir, that's all true."
The young man still reads from the board.
"Here the board says Roma people. If I don’t press it?"
"A living camp of them is burned."
"Homosexuals?"
"Massacred by the bullies."
"Here there is written child..."
"Beaten by parents."
"Woman! There is also woman..."
"Here it's random: killed, beaten, harassed, depending on the case, or you."
"What did you just say? It depends on me?"
"That’s right. If you get distracted and just think about your business, avoiding to press the button in time, the disgraced person pays the costs. Prepare yourself, because the interval is over and there are only a few seconds left until the game restarts."
The young man’s concern has slowly grown exponentially.
"No... look," he begins to bubble, trying in vain to to away,"I don’t want to, I just can’t, but what kind of place is this? I don’t wanna play."
"I'm sorry, sir, but that's impossible."
"Why?"
"You see, if everyone did like you the world would end."
"Why?!"
"Because, like all of us, you’re also the button of someone else, which allows you to enjoy your privileges."
"I wanna go back, then."
"It won’t help you, sir."
"Why…?"
"Because humanity has been participating in the game of life since it appeared on earth. The difference is that now, unlike what you call the past, you can no longer pretend not to know."